Tollerton is a small and friendly caravan site situated in open countryside on the edge of Tollerton village, ten miles from York.

The park offers holiday caravans for sale, caravans for hire, touring and camping, and winter storage. We have a small fishing lake, a large recreation field, a children’s playground, a laundry and the newly renovated Station Inn pub is located by the park entrance.

We sell new and secondhand static holiday caravans, which can be used for holidays between 1st March and 3rd January. The 2020 park rent starts from £2,280 per year. The following caravans are currently sited on the park and available for viewing:

* The price shown is the cost of the caravan. For more information on the costs involved in buying a new or used caravan please see our Frequently Asked Questions page.

We currently have 11 holiday caravans for hire. Please call Hoseasons on 0345 498 6589 to enquire about availability or make a booking.

We have 11 caravans for hire at Tollerton, in five categories:

Each caravan is double glazed throughout, and contains a freeview TV, DVD player, and a microwave. Gas and electricity for heating and cooking is included in the price. Bed linen and duvets are included with beds made up for your arrival.

A complimentary bottle of sparkling wine, flowers and chocolates are provided on bookings of 1 week or more in Tollerton 2 & 4.

Dogs are permitted in Tollerton Silver caravan only (maximum 1 dog). Please bring dog bedding and there is a £50 returnable deposit paid on arrival. Please complete a Dog Agreement form to take with you to the park.

Our Tollerton hire caravan bookings are managed by Hoseasons.

Please call Hoseasons on 0345 498 6589 to enquire about availability and make a booking.

Tollerton offers 25 grass and 25 hardstanding pitches, some with electric hookups, for motorhomes, tourers and tents from 1st March to 31st October. Please call Tollerton on 01347 838313 to book.

Touring and camping is available between March and October. These prices are fully inclusive. We do not charge extra for electricity, awnings, people, dogs, having fun or fishing in the lake.

£20.00 deposit is required for Bank Holiday bookings. VAT is included in all prices. Discounts are available for tents nor requiring electric hook-ups. Dogs are allowed if properly controlled on a lead at all times. There is a well presented shower block and laundrette.

Seasonal pitches are payable in full in advance. However monthly payments can be arranged. Please discuss with the Park Manager.

Tourers and motorhomes must be insured. Proof of insurance must be provided when leaving vans for seasonal use.

We offer winter storage for motorhomes and tourers.

Tourers and motorhomes must be insured. Proof of insurance must be provided when leaving vans for winter storage.

Tollerton caravan park is located in the beautiful North Yorkshire countryside between the Dales and the Moors, and there is lots to do in the area. Highlights include the historic city of York and Castle Howard.

Show Things To Do

Towns – Picturesque local towns include the market town of Easingwold, the spa town of Harrogate and the walled city of York.

Eating & Drinking – The Station Inn pub is located at the park entrance. There is a good selection of restaurants in Easingwold, Harrogate and York. Famous local eateries include Betty’s tea-rooms in York and Harrogate.

Activities – The park is located between two National Parks, the Yorkshire Dales and the Yorkshire Moors, and there are lots of places to go walking, such as the Howardian Hills or the Yorkshire Wolds Way (a 79 mile walking route running from Kingston-Upon-Hull to Filey). You can play golf at Aldwark Manor, Easingwold and Forest of Galtres. Horse riding at the York Riding School. Fishing in the small lake on the park, or at Redwood Park.

Beaches – Although the park is located inland, there are nice beaches within 50 miles at Filey and Scarborough. 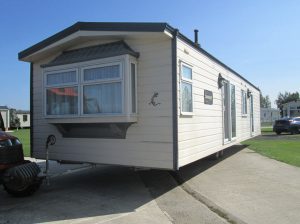 The 2005 Cosalt Claremont has two bedrooms and is fitted with double glazing and central heating. It is pictured on the road, and will shortly be sited on a proper pitch. 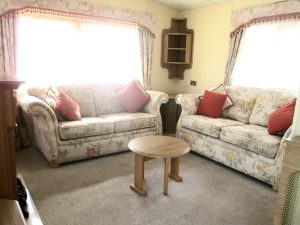 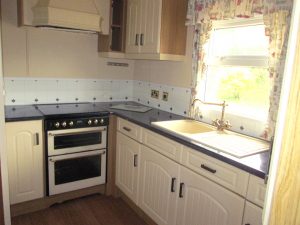 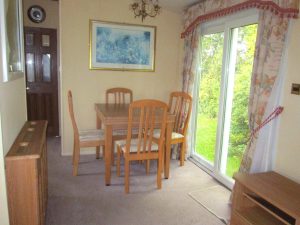 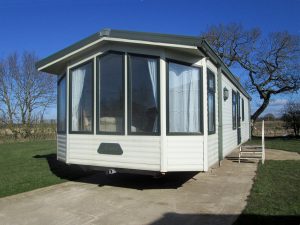 The 2007 Willerby Aspen has two bedrooms and is fitted with double glazing and central heating. The distinctive large windows make the Aspen one of Willerby's most popular models, and we are expecting it to go quickly. It is pictured on a temporary position, and will be sited on a new pitch. 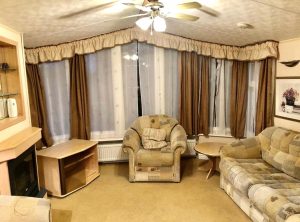 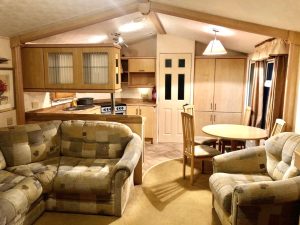 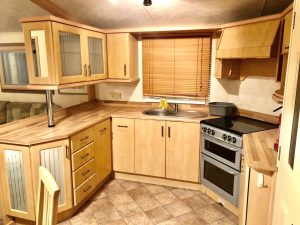 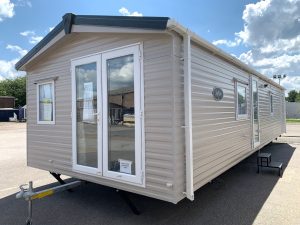 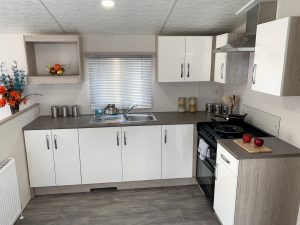 The Delta Liberty Saffron is a bespoke model, with double glazing and central heating, designed for comfort and style at an affordable price.

As a SPECIAL DEAL we are currently offering this caravan at an ALL INCLUSIVE PRICE of £29,910 which includes the caravan, transport, siting, connection of all services, gas safety check, 2 x 47kg gas bottles, steps, insurance until 31/10/20, and the full rent for the 2020 season!!!

The caravan is pictured at the factory, but it has now been transported to the park, is ready to be viewed, and a choice of pitches is available. 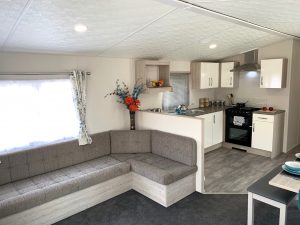 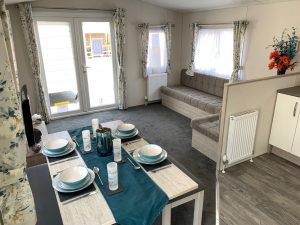